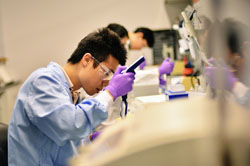 Free radicals play a significant role in many diseases, and are a key factor in the process of aging. Esteemed dermatologists are now warning of ways free radicals can enter and injure the skin – as new research reveals that antioxidants prevent free radical damage.

Free radicals are potentially dangerous to over-all health, according to fascinating new research from the National Institutes of Health, NIH. Researchers have discovered that free radical damage contributes to a host of chronic health conditions, and suggests free radicals also play a significant role in aging. Astonishingly – the results also offer a hopeful solution to prevent free radical damage – antioxidants.

The revolutionary research findings state, “A balance between free radicals and antioxidants is necessary for proper physiological function. If free radicals overwhelm the body’s ability to regulate them, a condition known as oxidative stress ensues. Free radicals thus adversely alter lipids, proteins, and DNA and trigger a number of diseases. Antioxidants prevent free radical induced tissue damage by preventing the formation of radicals, scavenging them, or by promoting their decomposition.”

New concerns about free radical damage and ways people are exposed to, or develop free radicals in the first place have been the focus of new research that has learned how free radicals and can enter the body in various ways — specifically through the skin, warns esteemed dermatologists.

Dr. Rashmi Shetty, celebrity doctor, author and a pioneer in the dermatology industry at the Mysore University in Mumbai, India, explains the effects of free radicals on the skin, “Free radicals are singlet oxygen cells and are produced due to various chemical reactions in the body like breathing, digestion, smoking, or stress. They can cause a lot of damage by harming the good cells of the body including affecting collagen production and pigmentation pathways.”

“Toxins could be those produced within the body and not eliminated naturally, or they are the ones ingested orally or inhaled or another way of penetration of toxin is through skin i.e. makeup, skincare products, as well as pollution”, adds Dr. Apratim Goel, renowned Cosmetic Dermatologist and Laser Surgeon in Mumbai, India.

Heavy metals, commonly found in lipsticks, makeup and skincare products can produce toxicity when their levels increase to a level that the body is unable to naturally eliminate. Environmental exposure is also a major source – Sulphur gas, carbon monoxide, bacteria, fungus, mold, viruses, and even dust can irritate skin, causing it to become dry, dark and patchy. Contaminated drinking water can invade the body and harm skin with toxins, bacteria, fungus, spores, parasites, and ova – as well as the accumulation of medications that have not been effectively metabolized by the liver or kidneys – causing free radical damage.